We have already addressed how serious of an issue anxiety is for individuals in today’s world. The truth is, while own our anxious thoughts can preoccupy us, we aren’t the only ones experiencing the burden of anxiety. Your dogs are suffering this problem too. In fact, anxiety can lead to serious behavioral problems in nearly every breed of dog if it’s not dealt with properly. In this post, we’ll examine dog anxiety in more depth and offer some recommendations for relief.

The Causes of Dog Anxiety

Dog anxiety has multiple causes. Some of the most common are separation, fear, and aging.

While those are just a few signs of separation anxiety, we also need to understand why they might occur in the first place.

Fear-related anxieties can be triggered by loud noises, strangers, and new or strange environments. Sirens from home alarm systems can be very loud and can cause dogs to panic and/or seizure.

Some of the sure signs that your dog is afraid are:

As dogs get older, they become susceptible to both physical and psychological issues that can provoke anxiety. One of the is called Cognitive Dysfunction Syndrome, or CDS. CDS affects sleep patterns, appetite, and bladder control among many other things. These changes can be very disorienting for dogs, leading to anxiety.

How to Combat Dog Anxiety

We have explored a number of factors that contribute to dog anxiety. In this section, we will consider some of the various solutions.

The goal of counterconditioning is to change your dog’s response to a particular stimuli that causes anxiety by replacing anxious behavior with more desirable behavior like sitting or focusing on the owner.

Another technique is called desensitization. In this technique, an owner gradually exposes the dog to the source of anxiety. Over time, the dog becomes less and less reactive to the anxiety trigger.

Believe it or not, some cases of anxiety become so severe that veterinarians recommend certain medications, including fluoxetine and clomipramine. For other anxiety-inducing events like thunderstorms, your vet may prescribe medications like benzodiazepines and antidepressants.

For senior dogs with CDS, specific drugs like Selegiline may help reduce the effects.

While medications and training can help curb dog anxiety, it’s best to try to prevent anxiety in the first place. Here are some practices that may help prevent dog anxiety.

Obedience training is an important tool for helping your dog manage anxiety. Obedience training establishes trust and lays the foundation for healthy relationships. Training classes are great places for dogs to interact in controlled environments

Regular exercise is an important part of a dog’s physical and mental development. Dogs that get a sufficient amount of exercise are less likely to become anxious. A proper diet will keep dogs functioning at their best, and are less susceptible to anxiety.

Socialization is a critical tool to prevent the development of anxiety in dogs. Introducing your dog to new people, dogs, and environments will help reduce their reactiveness in the future.

If you know that your dog has anxious tendencies, you can choose to avoid certain situations that might potentially become triggers. Avoidance may only be a short-term solution, but it could help prevent some unwanted situations while long term solutions are being worked on.

A great thing you can equip yourself with to help prevent dog anxiety is being able to read dog body language. Knowing when your dog is indicating fear or anxiety through body language will help you relate to them in a healthier way. You will also be able to sense when they are potentially becoming triggered, so you can react accordingly.

What is the Endocannabinoid System?

The Endocannabinoid System is a body system that all mammals, including dogs, have. The ECS helps to regulate internal functions of the body like the immune system and central nervous system. In some ways, the ECS is your body’s controller. That is, its role is to steer your body back to health when it get off course. Because of its widespread influence in your body, the Endocannabinoid System is associated with of variety of effects including anti-anxiety, anti-inflammation, and overall condition. 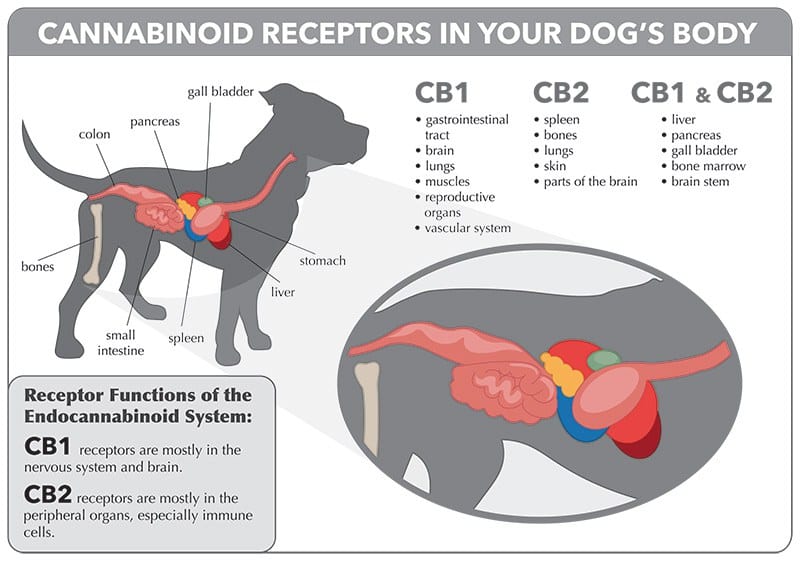 How Does the Endocannabinoid System Work in Dogs?

While most of the animal studies featuring the Endocannabinoid System have been performed on mice, it is believed that dogs respond to the CBD the same way humans do.

The Endocannabinoid System runs via a network of receptors called CB1 and CB2. CB1 is more commonly found in the brain and spinal cord. CBD1 receptors are concentrated in brain centers responsible for appetite regulation, memory, and emotional processing.

When CBD enters the ECS, it interacts with these CB1 and CB2 receptors and with the endocannabinoid anandamide.

It’s the interaction between CBD, a cannabinoid, and CB1 and CB2 that help regulate anxiety. As we said, these cannabinoid receptors are located in regions responsible for emotional behavior, state of mind, stress, and fear. The brain areas associated with these responses are the prefrontal cortex, amygdala, and hippocampus.

In this article, we have spoken about the causes, effects, and traditional solutions to dog anxiety. We have also considered Pet CBD Oil to relieve dog anxiety by looking at the endocannabinoid system in dogs. The good news is, as well as good training and prevention techniques, CBD Oil may be able to alleviate anxiety in dogs through the CB1 and CB2 receptors. If you are looking to purchase a Pet CBD Oil, please consider Hemp Bombs. Our chicken and beef flavors are sure to be a hit with your dog and may help reduce their anxiety.