Have you ever wondered why your pain or stress will gradually decrease on its own, or how your body heals itself while you’re asleep? The human body is a highly functioning machine with different systems working together to keep you as balanced as possible – one of these is the Endocannabinoid System, or ECS. While scientists did not discover this system until the late 1980s, it is believed that it has always played a role in maintaining balance and regulating biological processes. Today, scientists are studying the ability to manipulate this system to help restore balance more quickly and to relieve certain health issues by more natural means.

Understanding how the ECS works may give you insight into why you experience the benefits of CBD and other cannabinoids. Allow us to teach you the basics of the Endocannabinoid System, its components, and what makes it an invaluable part of your everyday life.

The ECS is made up of cannabinoid receptors, endocannabinoids (chemical compounds made within the body) and enzymes that break down these endocannabinoids. Located in the brain, connective tissue, glands, organs and immune cells, the ECS effectively impacts the whole body to create a stable internal environment regardless of the changing outside elements. Research suggests that the ECS may have a hand in monitoring several biological processes:

More studies are still being conducted to solidify exactly how the ECS affects these processes, but the concentration and activation of endocannabinoids and their receptors during times of imbalance suggests that the system does play a role.

What Makes Up The Endocannabinoid System?

The Endocannabinoid System only works due to its widespread receptors, endocannabinoids and metabolic enzymes.

The ECS makes changes in the body with the help of a network of receptors. These receptors sit on organs and nerves waiting for homeostatic imbalance to occur. Due to the recent discovery of the Endocannabinoid System, there could still be several undiscovered cannabinoid receptors. However, two primary cannabinoid receptors have been studied and are thought to be the most abundant:

The most abundant of the endocannabinoid receptors, CB1s exist mainly in the brain and central nervous system; however, these receptors can also be found in some peripheral organs and tissues.

While CB2 receptors are located throughout the body and in the brain, they concentrate mostly on the immune cells and peripheral nervous system.

Endocannabinoids are compounds created on demand by fat-like molecules that interact directly with the cannabinoid receptors to restore homeostasis. Both 2-AG and anandamide act as agonists which means they bind to receptors and cause a response throughout the body. 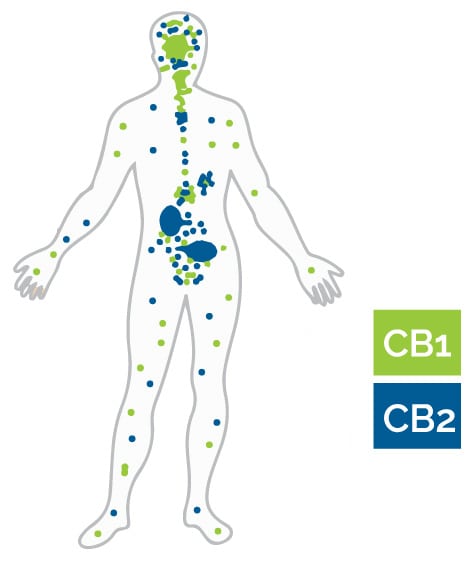 Anandamide, the “bliss” molecule, plays a role in mental clarity, sleep, memory, fertility and more. The levels of this cannabinoid naturally increase in the body during physical activity, leading researchers to believe that it contributes to “runner’s high.” Generally, anandamide doesn’t bind to either the CB1 or CB2 receptors particularly well even though it has an influence on many processes, especially in the brain.

Found in the brain and peripheral tissue, 2-AG binds well with both CB1 and CB2 receptors. However, it focuses its efforts on the CB2 receptors, giving this endocannabinoid a vital role in the immune response.

Unlike hormones and neurotransmitters, endocannabinoids do not linger and are not stored for use later. These metabolic enzymes make sure that the endocannabinoids are not around for longer than they’re needed by breaking them down quickly after they are used:

Monoacylglyceride (MGL) - Responsible for the breakdown of 2-AG

How Do Plant-Based Cannabinoids Interact with ECS Components?

THC
Known for its psychoactive effects, THC directly binds to and stimulates the CB1 receptors in the brain. It may have some of the same results as anandamide like pain relief, boost mental awareness and more, but since the metabolic enzymes do not break down THC, the compound produces longer lasting effects. THC-based products are still illegal in many states, so it is not a viable option when it comes to delivering widespread health and wellness.
CBD

Unlike most cannabinoids, CBD does not directly bind to the ECS receptors; rather the natural compound inhibits the actions of FAAH which increases the levels anandamide in the body for an extended amount of time with stronger results. More research is needed to confirm whether CBD can and does bind directly with serotonin, dopamine and opioid receptors to provide a variety of health and wellness benefits.

As far as science goes, the Endocannabinoid System is a relatively new discovery leaving a world of possibilities when it comes to potential therapy methods and our ability to manually alter the system. The first FDA-approved drug containing CBD, Epidiolex, is being used to help relieve seizures associated with Lennox-Gastaut Syndrome and Dravet Syndrome, which brings hope for more CBD-related products in the future. For now, people are finding anxiety relief, better sleep and improved calm and relaxation using CBD products. Try our CBD Oil, CBD Gummies and variety of other premium CBD products to see the therapeutic benefits this natural compound may provide.